The Geography curriculum at Denbigh aims to provide children with a range of cross-curricular opportunities that are closely linked to each year group’s chosen topics. Topics change on a termly basis for every year group. The aim is to show progression and development of our key concepts throughout the key stages. From Foundation Stage where children develop their understanding of the world up to Upper Key Stage 2 where children are prepared for secondary education.

The following key concepts are taught throughout our geography curriculum:

We aim to provide children with a greater understanding of their locational and place knowledge, understanding of physical and human geography and a chance to develop their fieldwork skills through exploring their environment.

Through a variety of learning experiences, including educational visits, children develop a sense of their place in the wider world whilst gaining an understanding of the places around them in their local area, including our school. Children enhance their geographical skills through using and interpreting a range of maps, globes and digital mapping on iPads as well as creating a range of sketches.

We strongly believe that children should have an understanding of how humans can affect their environments over time and use this information to make comparisons between different places. Eco Day and International Day provide children with opportunities to explore global issues and other parts of the world.

Staff at Denbigh know that good geography occurs in our school when:

– Children are inquisitive about the world around them.

– Children can communicate their knowledge in a variety of ways.

– Children take an active interest in their local communities.

– Good quality assessment is used to inform planning and builds on prior learning.

Milestone 1: To make simple maps and plans using basic symbols as a key. 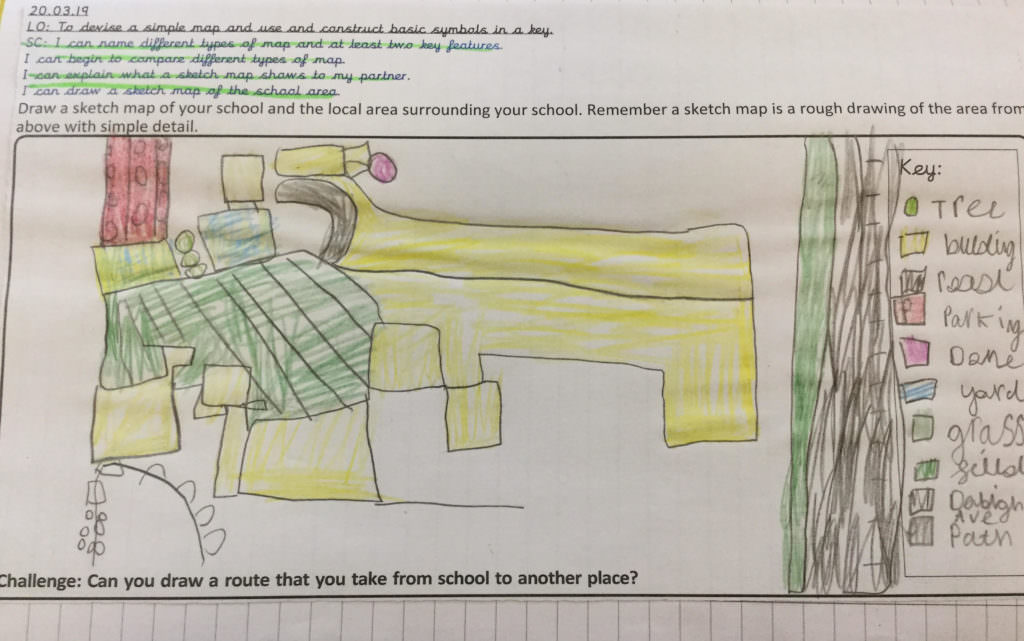 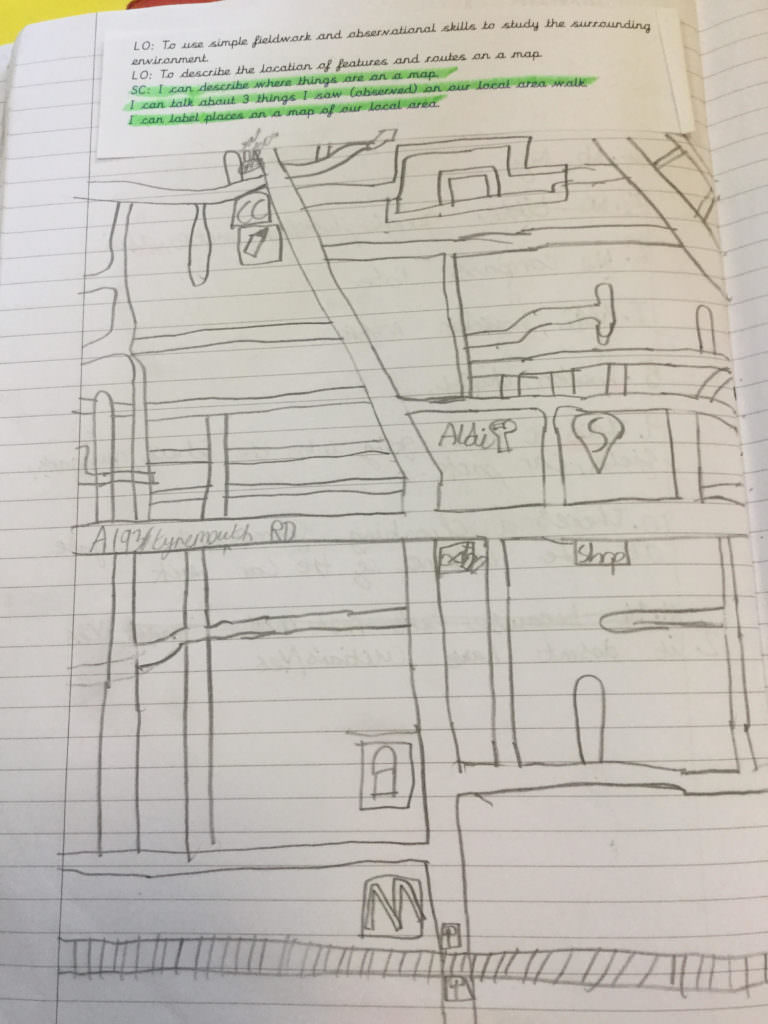 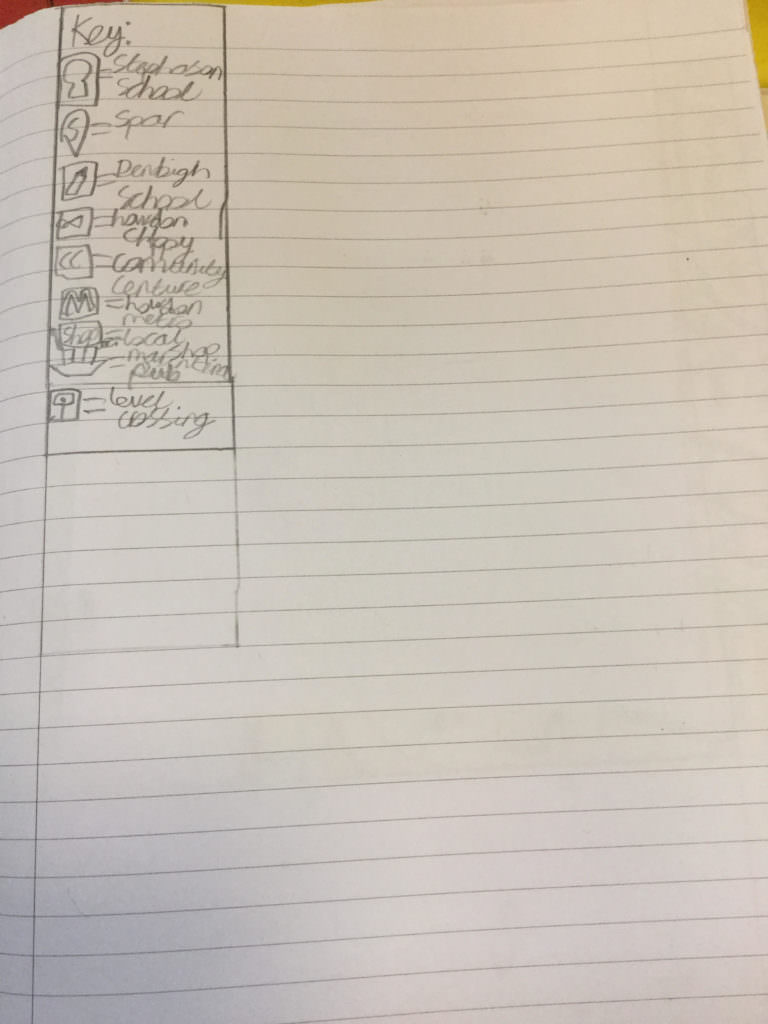 Milestone 3:To carry out fieldwork including sketch maps, plans or graphs. 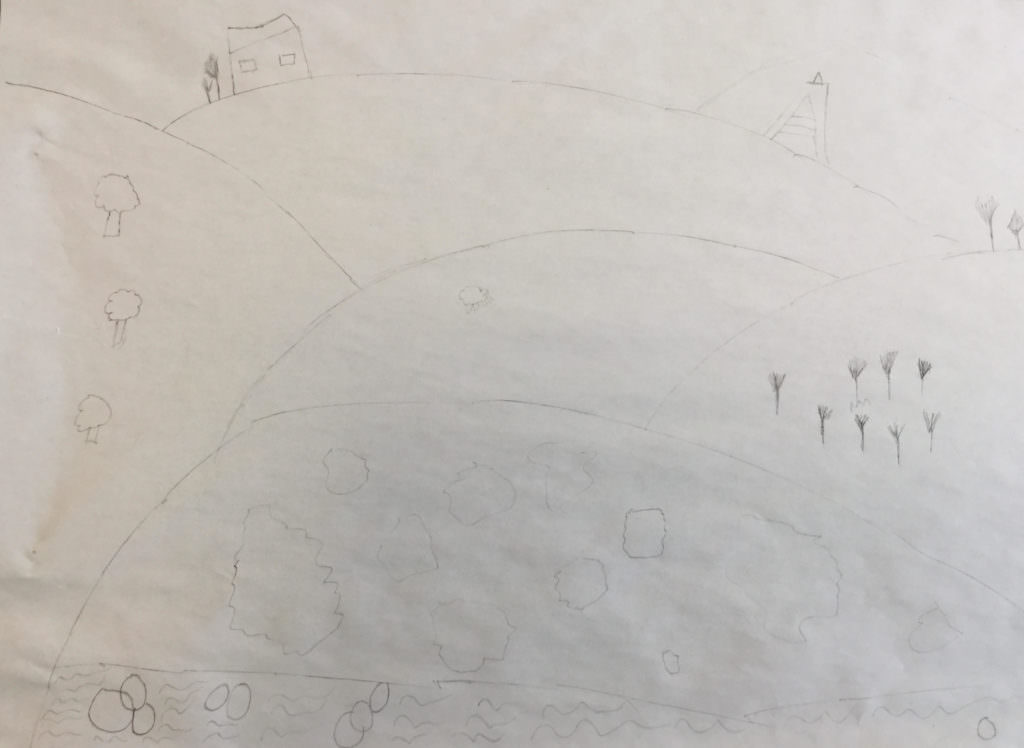 Ask simple geographical questions e.g. what is it like to live in this place

Explain the main features of a hot and cold place

Use world maps, atlases and globes to identify the United Kingdom and its countries, as well as the countries, continents and oceans studied at this key stage

Use locational and directional language e.g. near and far, left and right to describe the location of features and routes

Understand how some places are linked to other places e.g. roads, trains

Know about some present changes that are happening in the local environment e.g. At school

Suggest some ideas for improving the school environment

Use simple fieldwork to study the geography of the school

Use world maps, atlases and globes to identify the United Kingdom and its counties, continents and oceans studied at this key stage

Use simple compass directions (N,E,S,W) and locational and directional language e.g. near and far; left and right to describe location of features and routes on a map

Use aerial photographs and plan perspectives to recognise landmarks and basic human and physical features; devise a simple map; and use and construct basic symbols in a key

Consider how people often ‘spoil’ the area or make it better

Name and locate the world’s seven continents and five oceans

Name the main cities of England, Wales, Scotland and Ireland

Find where he/she lives on a map of the UK

Name, locate and identify characteristics of the seas surrounding the United Kingdom

Describe some of the features associated with an island

Explain what facilities a town or village might need

Explain how people’s lives vary due to weather

Describe how volcanoes are created

Describe how earth quakes are created

Use and interpret maps, globes, atlases and digital/ computer mapping to locate countries and key features

Use 8 points of a compass

Identify where countries are within the UK and key topographical features

Name and locate largest cities of the UK

Identify physical and human features of the locality

Explain why a locality has a certain physical features

Recognise there are similarities and differences between places

Develop an awareness of how places relate to each other

Name and located the capital cities of neighbouring European countries

Recognise the different shapes of continents

Carry out research to discover features of cities and villages

Identify where countries are within Europe; including Russia

Know how the locality is set within a wider geographical context

Name and locate counties of the UK

Locate and name some main islands that surround the UK

Explain why people are attracted to different cities

Know about the wider context of places -region, country

Explore weather patterns around parts of the world

Know the difference between the British Isles, Great Britain and UK

Understand why there are similarities and differences between places

Recognise the different shapes of countries

Plan a journey to a place in another part of the world, taking account of distance and time

Explain why many cities of the world are situated by rivers

Know location of: capital cities of countries of British Isles and U.K., seas around U.K., European Union countries with high populations and large areas and the largest cities in each continent

Use eight points of a compass, four and 6 figure grid references when reading maps

Understand how humans affect the environment over time

Know about changes to world environments over time

Understand why people seek manage and sustain their environment

Identify where countries are within Europe; including Russia

Understand why there are similarities and differences between places

Compare the physical and human features of region of the UK and a region in North America, identifying similarities and differences

Use fieldwork to observe, measure, record and present the human and physical features in the local area using a range of methods including sketch maps, plans and graphs and digital technologies

Use the eight points of a compass, four and six-figure grid references, symbols and key (including the use of O.S. maps) to build his/her knowledge of the U.K. and the wider world

Use maps, charts, etc. to support decision making about the location of places e.g. new bypass

Locate the world’s countries, using maps to focus on Europe (including the location of Russia) and North and South America, concentrating on their environmental regions, key physical and human characteristics, countries and major cities

Name and locate countries and cities of the UK geographical regions and their identifying human and physical characteristics, key topographical features (hills, mountains, coasts and rivers), and land-use patterns; and understand how some of these aspects have changed over time

Identify the position and significance of latitude, longitude, equator, Northern Hemisphere, the Tropics of Cancer and Capricorn, Arctic and Antarctic Circle, the Prime/Greenwich Meridian and time zones (including day and night)

Explain how the time zones work

Name the main lines of latitude and meridian of longitude

Name the largest desert in the world

Describe and understand key aspects of human geography, including types of settlement and land use, economic activity including trade links, and the distribution of natural resources including energy, food, minerals and water

Understand geographical similarities and differences through the study of human and physical geography of a region of the UK, a region in a European country, and a region within North and South America